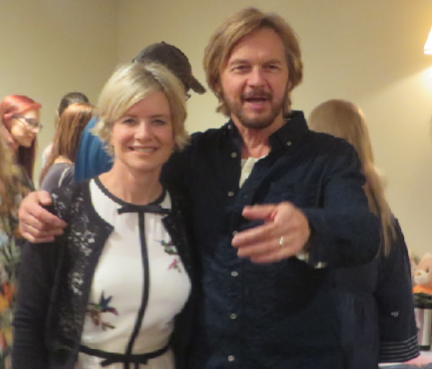 No question when you hear soap opera fans mention the word “supercouple”, Steve and Kayla from Days of our Lives fit that description.  For decades, Stephen Nichols and Mary Beth Evans have acted out one of the most romantic and enduring love stories in daytime drama.  Not only do these two actors have a large fan base…but they have several sectors of fan bases, including the original fan club founders who attended the event as well as the S&K Twitter fan group.  Mary Beth even mentioned several times how she loved to see how such lasting friendships have continued on over the years because of their work on the show.

Enjoy this video recap of the event by OutTakes‘ Angela Trupiano!

Here are some “Days of our Lives” related answers from the two different Q&A sessions with the actors which happened throughout the weekend.

PRESENT STORYLINES OF “STEVE AND KAYLA” ON DAYS OF OUR LIVES

HOW DID STEPHEN PREPARE FOR THE STORYLINE WHERE STEVE JOHNSON IS BLIND?

SN:  There’s so much online these days.  I studied people talking about different kinds of blindness.   I had to learn how to use a cane…my “candy cane”.  I watched hours and hours of videos.  I had to look down a lot in the scenes because the set lighting would reflect on the sunglasses I wore and would cause a glare.  I actually did those scenes with my eyes closed so I would have that feeling of blindness.

ON KAYLA’S SCENES WITH THE YOUNGER ACTORS ON THE SHOW

MBE:  I bring my own personal mothering to all the younger people.  They are all such sweet people too.  Kate Mansi (Abigail — scenes airing after November), Casey Moss (JJ), Marci Miller (Abigail — scenes airing up until November) when she was there.  I am related to practically everybody!  Sal Stowers (Lani) is a sweet girl; and she was really invested in that story of Lani’s baby dying.  Those were such sad scenes.  None of us expected that story to come.

WHEN STEPHEN AND MARY BETH WORKED ON GENERAL HOSPITAL (STEFAN AND KATHERINE) IN THE 1990S, THEY HAD QUITE A LOT OF TIME WORKING WITH TYLER CHRISTOPHER (NIKOLAS) IN STORYLINES.  RECENTLY, THEY WERE UNITED AGAIN AS “STEVE AND KAYLA” ON “DAYS” WHERE TYLER PLAYS “STEFAN”.  HOW WAS THAT EXPERIENCE?

MBE:  Tyler is a doll.  I love working with him.  The dialogue with Steve and Kayla meeting Stefan [with all the inside jokes from our time together working on GENERAL HOSPITAL] was all written, not ad libbed.  Tyler’s son was just on DAYS when we taped the Christmas episode.

SN:  Yes, the crew and cast bring their kids for those Christmas hospital episodes; and they get their heads bandaged or put in casts.

MBE:  It’s horrible for Kayla.  The only way to justify it is that she will do anything for Steve; and she feels that he won’t do it for himself.  It’s a slippery slope for the character.  I think it’s the hardest thing she’s ever done.

TO THIS DAY, “STAYLA” FANS LOVE THE GROUNDBREAKING SCENE WHERE KAYLA REMOVED STEVE’S PATCH TO TREAT HIS INJURIES AFTER HE WAS BEAT UP.

SN:  It was one of those scenes.  You know it was an important moment, a turning point in their relationship, especially for my character.  It was a great responsibility because no one had ever or was going to be under that patch; and I trusted her.  There are a few really great scenes like that which come along, but not that many.

MBE:  I always feel when I’m acting like I’m going by the seat of my pants.  I go completely emotional and visceral.  It’s not like I have a piece of paper and study.  I never think about the impact of the scenes over all.  I just go with it because it is such an emotional thing for me.  What we do so well is connect emotionally.  Kayla just saw the beauty in Steve.  That was a beautiful scene; one of my favorites.  We made a bigger deal out of that scene than was written for sure.  We played the moment and what we in our hearts would feel.

SN:  They had written me all the way through as being “Patch”, the stoic who doesn’t really show his feelings and tries to keep it all inside.  I added some stuff about Bo putting my eye out, getting a terrible patch in the hospital and then getting a custom made patch done that made me feel like a badass.  What we added together was that this is the moment where he DOES break down.  This is the private moment where he says, “Okay, baby, this is how I really feel”.  I think that was probably my favorite scene for us. 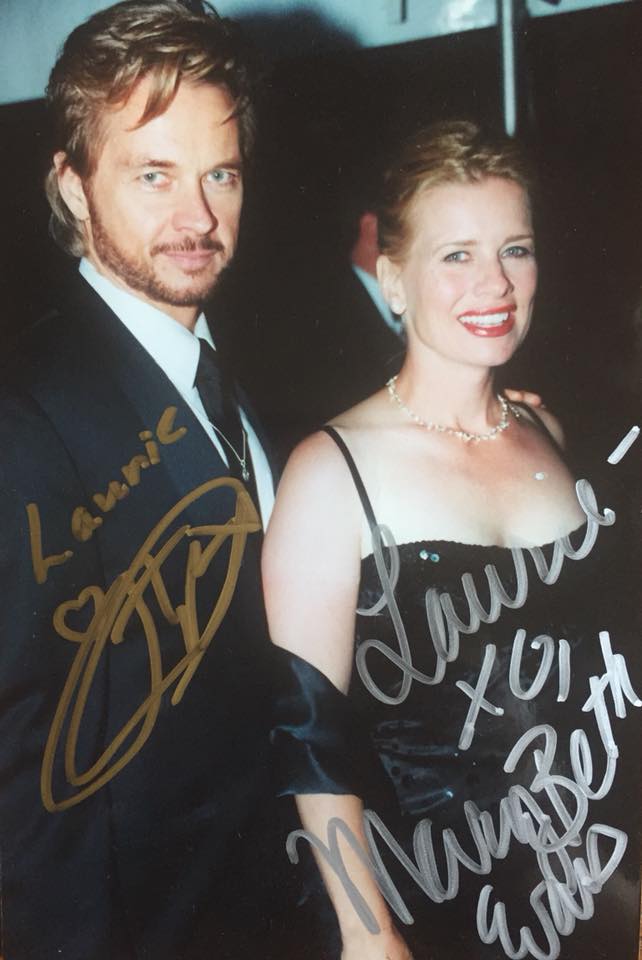 HOW LONG DID IT TAKE FOR YOU TO ESTABLISH CHEMISTRY WITH STEPHEN?

MBE:  One second!  I came into the audition.  They wanted us to meet and do a scene and see if we had chemistry.  He had come in from the set.  He was wearing that leather jacket with the fake scar, that hair.   I felt from the very first we were intrigued with each other.

ON WATCHING PAST STEVE AND KAYLA STORYLINES

MBE:  I find one of the most interesting things about watching those old clips is I just don’t remember.  It’s such a blur.  If it wasn’t for the old videos, I absolutely would not remember.

MBE:  I really enjoy watching our past work.  We really had something.  There was always that undertow with us that was palpable.  I’m a fan of Patch and Kayla.  I’m protective of them.  It has been the sweetest journey.

SN:  Yeah, I get choked up.  Even if I don’t remember.  It was some very sweet stuff.

MBE:  And the majority of our lives, we worked together.

As has been rumored for several months, Soap Opera Digest confirms in its new issue this week that Stephen Nichols (Steve) is departing “Days.” Nichols, whose contract ended in March, should wrap airing around early-mid September.

For me, Days of Our Lives is home and I want to be there … I love the people, I love Steven Earl Johnson and I love what Mary Beth and I have been able to create together. I was excited to see what this new team would bring for us and for all of Salem. I’ve been in this business long enough to understand the rotation of stories, and I get that we can’t always be at the forefront. And despite my disappointment in the lack of story this past year, I’ve always worked hard and we’ve always tried to find the moments in whatever we’ve been given. I think we did that. Whenever I see a scene or montage you guys post, I am so touched and I remember just how much story we told for so many years and how rich it was. I’m so grateful for that. And I know that there are still years of Steve and Kayla’s story left to be told. I hope we get to tell that story. Your unwavering support tells me you hope that too. Thank you and much love, Stephen
#Days @marybeth.evans #patchandkaylaforever

Throughout the fan event weekend, fans repeatedly expressed upset and concern over this latest news regarding Stephen’s future on the show and what will happen with the characters of Steve and Kayla.  Regardless of what the future holds, Stephen Nichols will always be remembered for portraying one of the most iconic characters in daytime drama…Patch aka Steven “Earl” Johnson.  Thank you, Stephen! 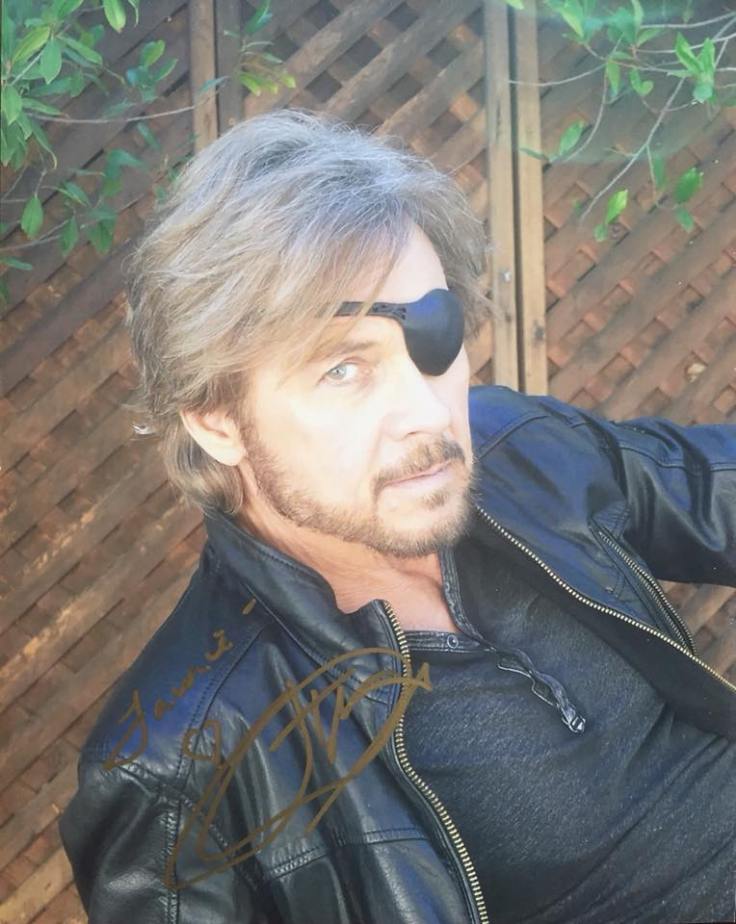 KEEP UP WITH STEPHEN, MARY BETH, OUTTAKES, REACH FOR THE STARS AND THE STEVENS JOHNSON SYNDROME FOUNDATION ON SOCIAL MEDIA 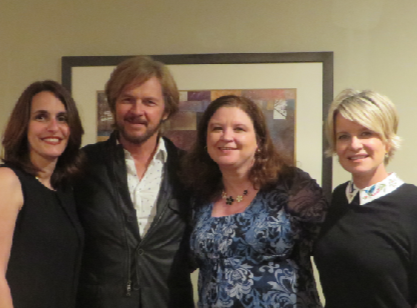