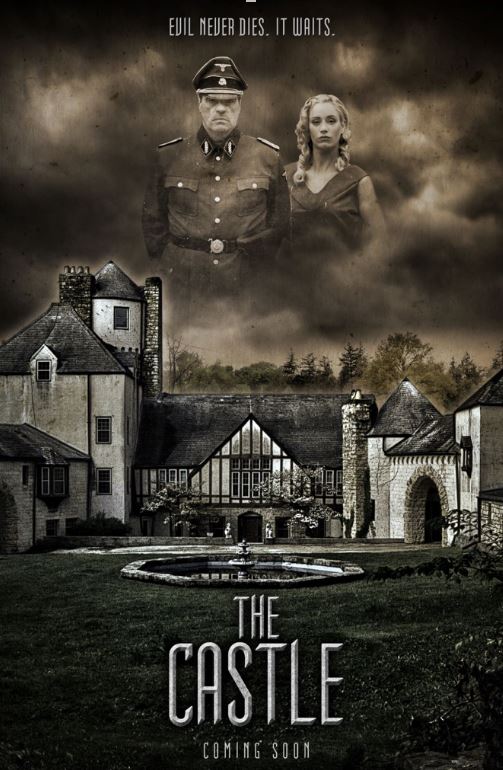 Founder of Chicago-based Distant Star Pictures, John Patrick Tomasek has a passion and deep knowledge for filmmaking. He has written and directed documentaries and several short films, some in the horror genre such as Forgiveness & Distorted as well as made for television projects like Traitor.  John joins OutTakes Interviews to discuss his current feature film The Castle, a blend of horror, history and psychological terror starring Lew Temple (The Walking Dead) and Matthew Ashford (Days of our Lives).  Find out how you can be a contributor to this exciting project!

OT:  So tell us what The Castle is about?

JT:  The Castle is a WW2 horror feature which is really about the past and present. A couple of genres meshed together, sort of in the vein of The Shining and The House on Haunted Hill, but it’s a totally unique story and very different from what else is out there. About the first eight minutes of the movie take place during the last days of WWII. The Nazis have a stronghold of this castle in Germany where they have been committing all sorts of atrocities such as executions by firing squads. Also, they had been plundering treasures, gold and other artifacts throughout Europe and hiding it in a secret room in the castle. Allied forces arrive and kill the Nazis. The Colonel and his beloved Johanna take their own lives in a suicide at the end. The story then comes to present day with Walter (Lew Temple, The Walking Dead and Unstoppable) and Jim (Matthew Ashford, Days of our Lives). Walter and his wife Anna arrive at the castle on a dream vacation. They quickly find out things are not as they seem. The couple are the first to inhabit the castle in 75 years; and strange and terrifying things quickly start to happen. Ultimately, they are fighting for their very souls.

OT:  You are involved with The Castle on a variety of levels.  What inspired you to take on this story?

JT:  Yes, I am directing, writing and producing as well as with helping with the set designs and locations. I really am very hands on. The idea of a story in a haunted setting was always appealing to me. We had finished filming a television pilot set in WWII with reenactors  — all dressed up in American and German uniforms with their vehicles and tanks.

I was shown the location of an actual castle, approximately two and a half hours outside of Chicago, from the 1920s that looks like it had been there for many centuries and I just had an epiphany!  I was looking at this castle which appears very aged and thought, “Why not do a WWII horror film?” The story just hit me.

OT:  Are you a fan of the horror genre in particular?

JT:  I’m actually a fan of many genres.  I have a comedy sitcom that I am writing.  I also have a psychological crime thriller that is set in present day.  There’s a sci fi fantasy project I have.  But I do have a soft spot for the horror genre.  Horror is a lot of fun.  You get to bend the rules more and keep people on the edges of their seats biting their nails.

OT:  How did Lew Temple and Matthew Ashford get involved in this film?

JT:  A good friend of mine, David Michael Ross, really was pivotal in introducing us to these fine gentlemen.  He is a great and talented writer and producer himself who ended up helping me with this project.  It was really nice collaborating on some of the key concepts of the script with him and at one point he had offered to introduce me to these wonderful actors.

OT:  We have a lot of soap opera fans who love Matthew Ashford’s work from Days of our Lives and are excited to see him in this movie.

JT:  Matthew Ashford plays Jim who is a really good college friend of Anna and Walter’s from many years back. He drives up and surprises Walter at the castle one evening. His character is a fun-loving playboy who travels around Europe every year, driving up in a really expensive sports car with a jetsetter lifestyle. He also provides some comic relief. At one point he  hears strange things in the castle such as marching and German voices in the night. Eventually, as Walter’s character loses himself to the castle, Jim has to help Anna save Walter; and things become a desperate and a frantic situation. I can tell you that Matthew Ashford is one of the most pleasant actors I have ever had the pleasure of directing. He is such a nice guy in person; and he was so easy going. He offered many suggestions and was very collaborative. All around a real pleasure to work with. I’m really looking forward to having him do the actual movie now that we’ve had a chance to meet each other and work on the trailer together. I encourage all his fans to go check out the trailer. Matthew does a fantastic job!

OT:  What were the challenges of producing and directing this film?

JT:  When it all comes down to it, it is really easy when you have a great story and talented actors. You have many elements in place; great locations and it is just a matter of getting the right producers involved to believe in you and help you on the funding side. We do have a producer in particular who is really helping us pitch the project to studios and investors. For me, that is the biggest challenge. Everything else seems to just fall into place.

OT:  When you are dealing with a plot involving WWII and Nazis, was achieving historical accuracy difficult?

JT:  Luckily we have really great reenactors who are really educated historians. For example, we have one G.I. reenactor, Vito Abbinante, who helped with the Allied Forces uniforms. Everything was accurate down to the button. On the German side, Craig Schwartz made us aware of the different kinds of uniforms that the Germans would wear. For example, the SS uniforms versus the standard German army uniforms. But we are not too heavy on historical detail because it is only a small opening portion of the movie. There will be flashbacks and various interactions of past and present. Sometimes you won’t even be able to differentiate the two as things become twisted in the castle.

OT:  How can audience contribute to your Indiegogo film campaign?

JT:  We have some wonderful perks at every level. We have small $5 levels that get a thank you email. We have larger rewards such as receiving a part in the movie with one of the main cast members (Matthew Ashford or Lew Temple. One of the perks is even a custom-made medal that we had created for the Castle which really neat. If you want to see this great movie become a reality, anything you can do helps our producers and really fuels their efforts to get this funded and filmed.

OT:  What do you want the audience to take away from this movie?

JT:  It’s about having a good time and getting scared. It’s okay to be scared obviously when we are watching horror movies. I really want to entertain the audience and maybe shock them a little bit. At the end of the day, this is a great entertaining scary movie for the viewer as well as a love story at heart as Anna becomes desperate to save Walter from the evil at the castle before it’s too late.