Tribute to the Phoenix — Remembering Joseph Mascolo (Stefano Dimera, DAYS OF OUR LIVES) 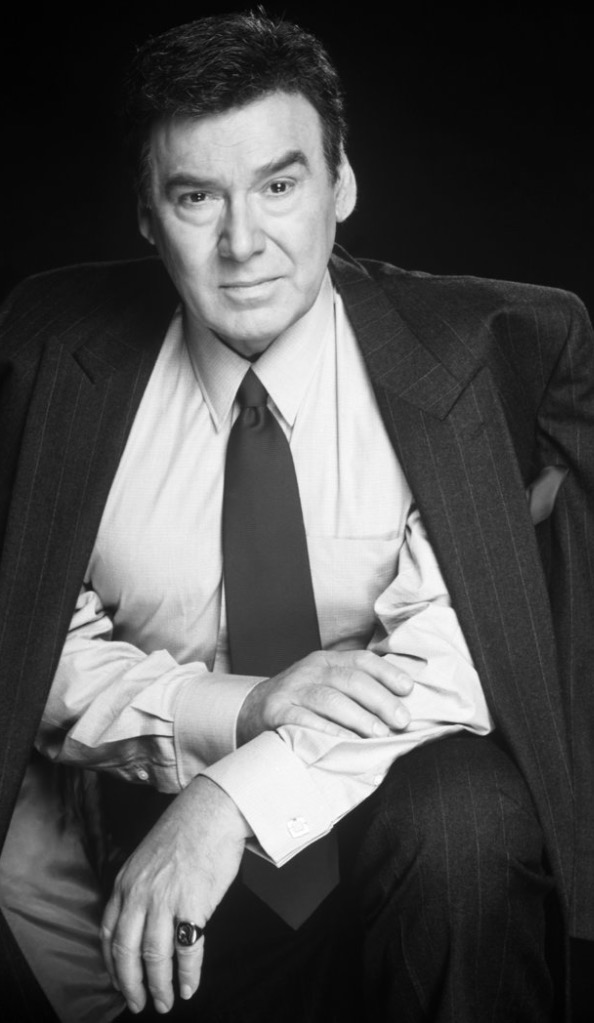 It started when I was in sixth grade. I used to rush home from school to watch my video tape recorded episode of DAYS OF OUR LIVES. What had that dastardly Stefano Dimera done this time? Had he kidnapped Marlena and Liz? Did he fake his death? Was he trying to bust up the supercouple of Bo and Hope? I would curse that horrible villain and wish he would get what was coming to him. Yet later on when the fantastic actor Joe Mascolo was no longer on DAYS for many years, I missed the charm and humor and excitement that he had brought as the character of “Stefano” every day. Without my villain that I loved to hate, it just wasn’t as much fun. Fortunately for me and many DAYS fans, Joe returned to the show in 1993 and stayed for another two decades longer to enthrall and infuriate us. It was quite a ride!

Joseph Mascolo, an actor who was known best for portraying the villainous Stefano DiMera on the daytime soap opera “Days of Our Lives,” died Thursday, Dec. 8, 2016, according to Soap Opera Digest. Mascolo, who had Alzheimer’s disease, was 87.

Mascolo played the iconic “Days of Our Lives” villain on and off from 1982 to 2016. The role had been created especially for Mascolo by head writer Pat Falken Smith, who had seen the actor play a crime boss in the 1981 miniseries “The Gangster Chronicles.” Mascolo brought a charismatic menace to the sinister businessman and soon became one of the all-time great soap opera villains. Over the years, Stefano would die and be resurrected many times.

“The smile on Joe’s face is something we’d all come to find comfort in, and he will be sorely missed,” said Ken Corday, executive director of “Days of Our Lives,” in a statement to Soap Opera Digest. “His larger than life presence, kind heart, and unwavering positivity has impacted us all for decades and will live on in the memories of his many fans. Our thoughts and prayers go out to his family during this difficult time.”

Mascolo was born March 13, 1929, to Italian immigrants in West Hartford, Connecticut. He attended the University of Miami and West Point Academy. He had a passion for music and considered studying orchestral conducting and opera before deciding to pursue an acting career.

He appeared in a number of theater productions in New York and London before making his way into television and would continue to star in regional theater productions even while maintaining a busy soap opera schedule. Before “Days of Our Lives,” he appeared on “All in the Family,” “Baretta,” and “Kojak.” He had a recurring role as Mayor Pete Santori on the Jack Palance detective series “Bronk.” On the big screen, he appeared in “Shaft’s Big Score” (1972) and “Jaws 2” (1978).

After his initial stint on “Days of Our Lives” came to an end, Mascolo appeared on the soap opera “Santa Barbara” for 12 episodes. He later appeared on “General Hospital,” and in 2001 entered into a multiyear contract to appear on “The Bold and the Beautiful” as Massimo Marone IV. 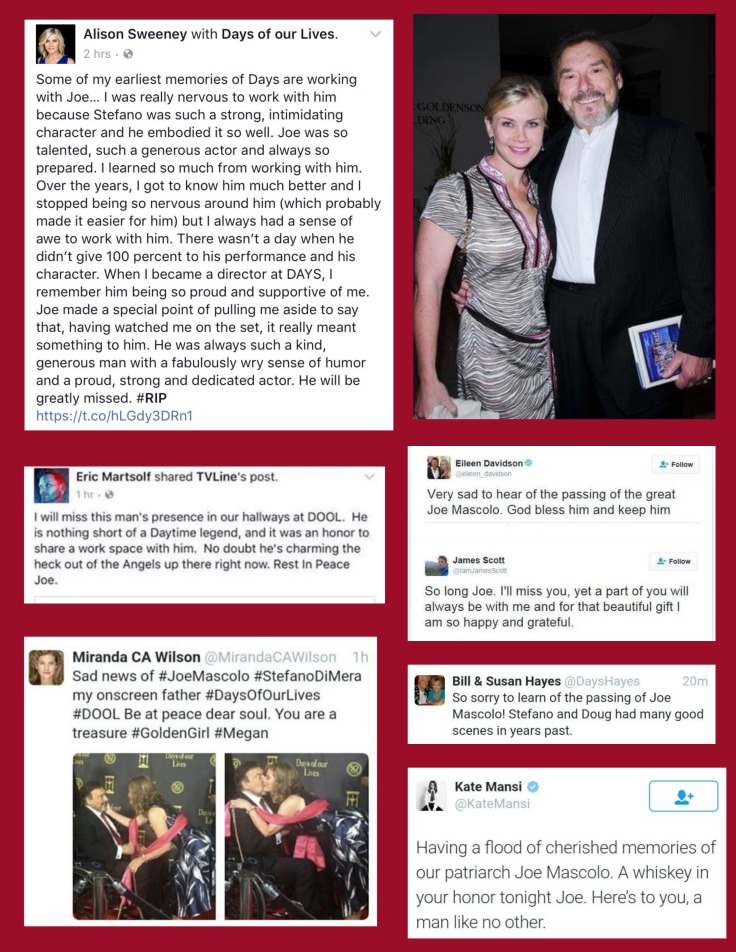 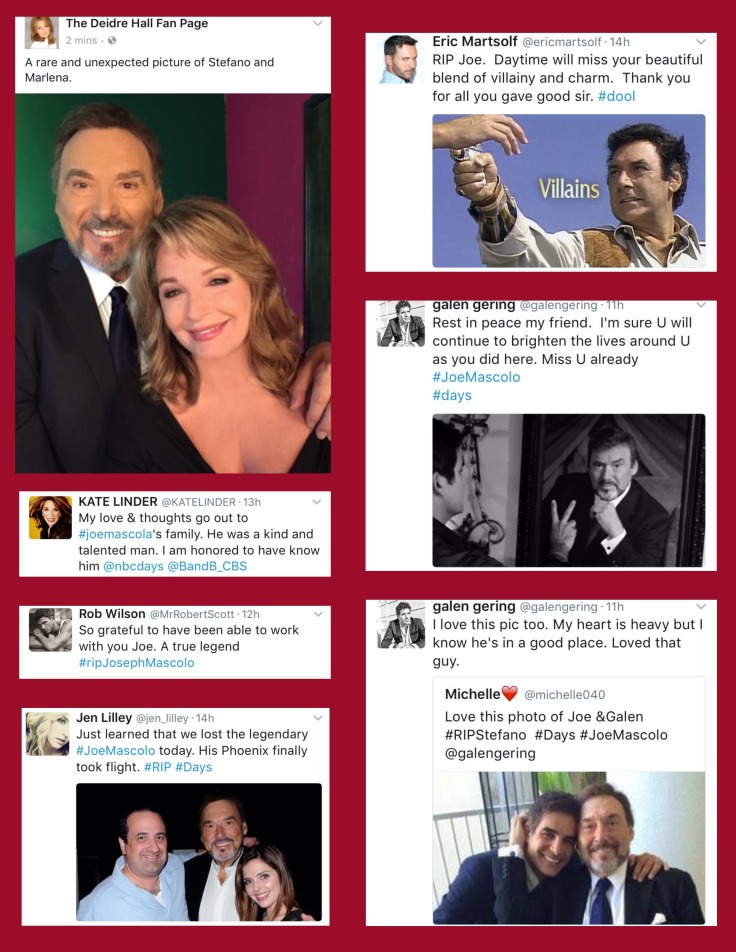 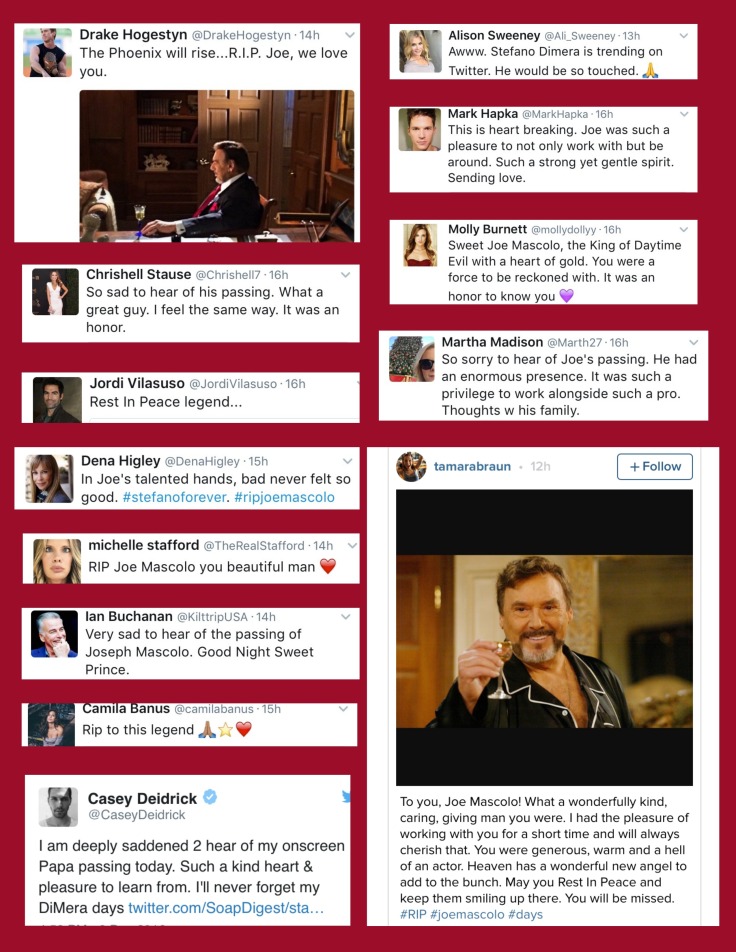 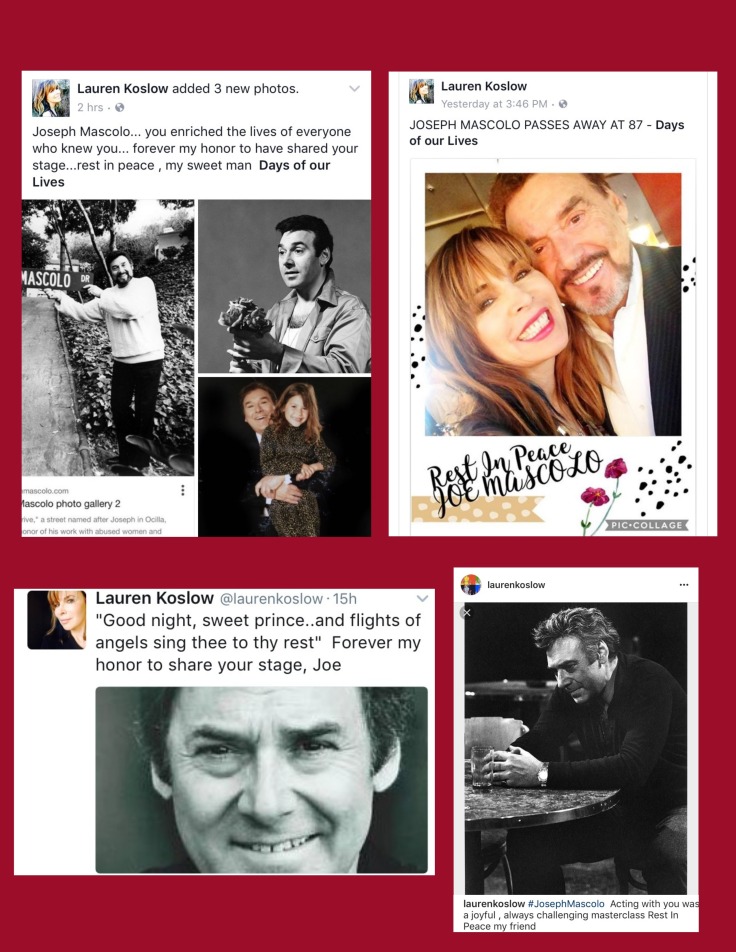 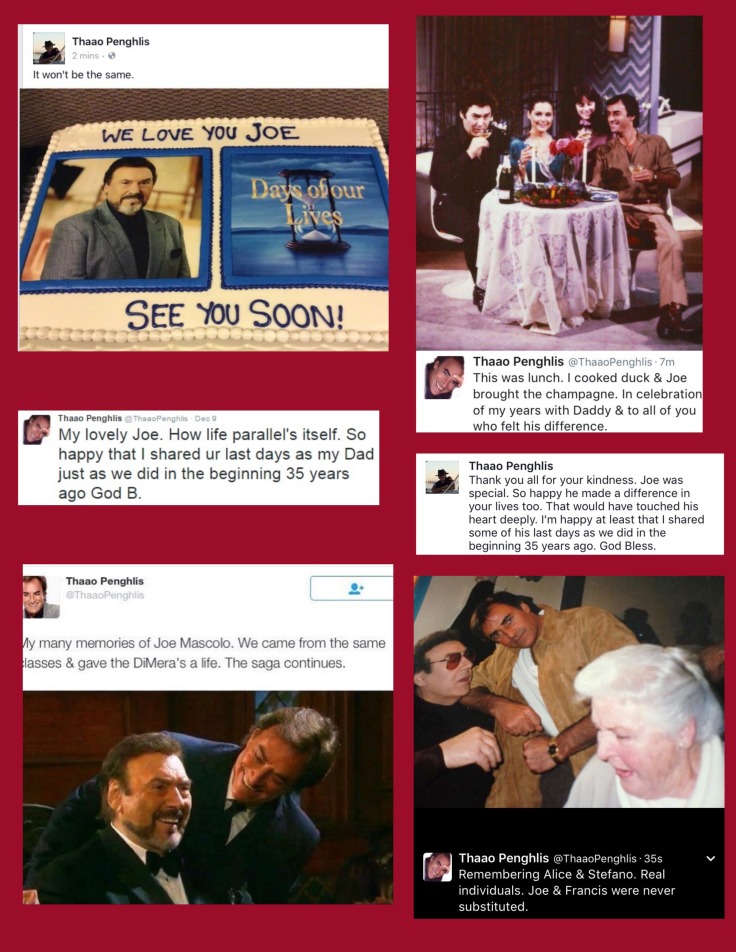 I was with Burt Reynolds and Charles Nelson Reilly during a Neil Simon play in Houston, Texas.  My agent called to ask if I would test for this role on daytime TV.  I refused.  They asked that I read.  I refused.  Would you come to talk?  When I came back to Los Angeles, I agreed to talk.  Afterward, I told my agent to find out who the highest paid person on the show was and tell them I want a dollar more.  I thought for sure they’d tell me to go away.  I realized I was being a little difficult.  I was having fun with it.  The headwriter at the time, Pat Falken Smith, had seen me in a miniseries called “Gangster Chronicles” and wanted me for Stefano.  It was her call.  She stuck to her guns.  She wanted me for the role in spite of what others said and in spite of my protests.  I gave her a few books on power and discussed what I would like to see in the role.  The music, the chess, opera, art, culture, sense of power, family loyalty, and love.  The bad guy cannot be totally dark.  I particularly like the fact that if he gives his word to do something, he will not stop at anything.  For the people he loves he will go to the end of the world. — DAYS OF OUR LIVES:  THE COMPLETE FAMILY ALBUM: A 30TH ANNIVERSARY CELEBRATION, by Lorraine Zenka

RIDE OF THE PHOENIX

This is a fan video I made featuring some of the Best Hits of Stefano during the 1980s; set to one of Stefano’s favorite classical pieces:  “Ride of the Valkyries” by Richard Wagner.

When I had the good fortune to meet Joe at the 50th Anniversary Days of our Lives gala, he was such a fun flirt…and it was an honor. It is my pleasure to put together this tribute to the man whose character of “Stefano Dimera” is one of the most memorable villains not only in soap opera but in television. — Laurie Baker

One thought on “Tribute to the Phoenix — Remembering Joseph Mascolo (Stefano Dimera, DAYS OF OUR LIVES)”